A Peek Under the Hood of The Connected Car: What It Does & How It Applies to IoT Systems

A Peek Under the Hood of The Connected Car: What It Does & How It Applies to IoT Systems

While technology like the connected car has been hyped for years, the growth for all Internet of Things (IoT) applications across all sectors is growing exponentially. Gartner projects all of these connected things will grow from 4.9 billion in 2015 to 25 billion by 2020, and this includes cars. By looking at connected car functionality and architecture, we can get a better understanding of all IoT platforms. To simplify, there is a fairly consistent set of IoT components—sensors, mobile or device apps, big data stores, data science algorithms, and analytical output with a platform as a service (PaaS) layer underneath.

Behind this type of dashboard (see info below), predictive analytics and machine learning algorithms can incorporate driving behavior and sensor data to improve maintenance and mileage, route us to gas or charging stations, predict destinations, and even get us a better deal on car insurance.  The same IoT system patterns apply to every industry—energy companies will predict issues before they happen on the power grid, manufacturers will optimize supply chains and engage differently with consumers, and industrial equipment will become more efficient.

The Connected Car—Functionality and Architecture

The demo system ultimately predicts a driver’s destination and determines if they can get there on the current tank of gas. Below, the connected car functionality and architecture is laid out in a diagram and explained further in the context of a world-class architecture, showcasing several Pivotal technologies. 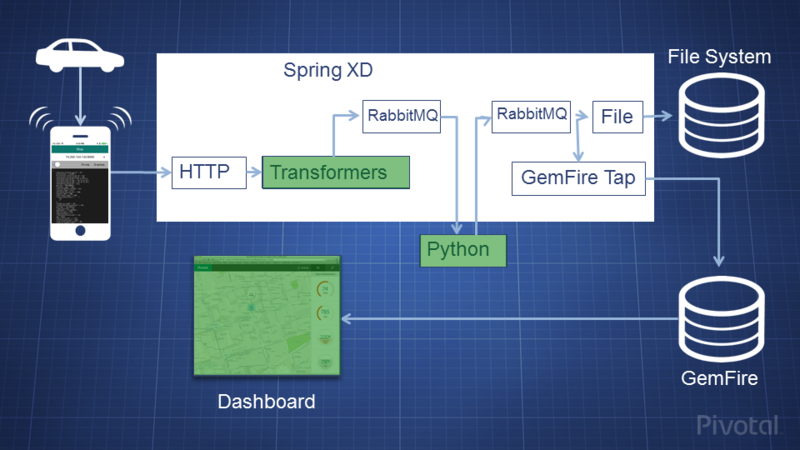 Here is how it works:

Figure 3: Dashboard with real-time, predicted, possible destinations on the right side.

Figure 3: Dashboard with real-time, predicted, possible destinations on the right side.

Commentaires sur A Peek Under the Hood of The Connected Car: What It Does & How It Applies to IoT Systems